What Nelson Mandela Taught Me

He was released from prison just about the time I was beginning to comprehend the meaning of apartheid. It was in awe when I heard of a man who; despite being proclaimed a terrorist inspired and reconciled a nation of disparate interest through his perseverance and dignity. 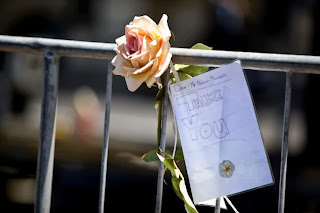 Nelson Mandela taught me the precious lessons of life that have become my principles in many things that I do.
In a childhood empowered with a catholic education and moral science lectures; I realized that sometimes, it may lead a person away from the realities of life.  Leaders are not infallible. They are human like you and I. In real life, there are no Gods. We are all full of inconsistencies and incongruities. The acceptance of that is key to possibilities that there is nothing that is not possible. That has been the premise of my journey as a human being.
We are weak and strong, big and small, right and wrong.  In his attempt to do the right thing by himself, Mandela taught me that one person’s right is another person’s wrong. In the event of a confusion on my own definition of the right thing to do; I evaluate my own core beliefs. I have learnt that beliefs may never be black and white. That truths are never absolute. That core beliefs define a person and they need to evolve in the whole process of a person’s personal development. This often requires a purposeful intention and an ability to change what is norm. To challenge how things are done and to try new ways of doing the same things. Often failing. But never giving up.
I learnt to dream of the impossible and focus on making it possible. During the 1985 soccer world cup, Jason Tshabalala told Madiba that as per experts the South African team may reach the quarter final and no further. Mandela smiled and said – According to experts, you and I should be dead.
There will always exist a precedence of things not being done or an expert who tells you what works in a certain circumstance. I have learnt that there is always another way. There is always a possibility. And that till that last possibility is not exhausted; I will not give up or give in. I also realized as I grew older that possibilities are endless. The only thing that often makes people give up is impatience or failure to focus. He said – It always seems impossible until it is done.  It does.
I learnt that I am responsible for my own destiny. I am the master of my fate and I am the captain of my soul. I have choices to make every day. I am responsible for those choices and the outcome of each of those decisions. What is important is that I learn in the process. What is important is to realize that the past disappointments and glory have no significance except in the process of learning. I learnt to invest my energy in creating an optimal present and future. After climbing a great hill; there are always many more hills to climb. I have learnt from him to take a moment to steal a view of the glorious vistas and look back on the distance that I have come. He has taught me not to linger for there is more to be done and that this walk will never end.
Fear is the basis of all anxieties. I learnt from Nelson Mandela to be fearless. I learnt that to be fearless the first thing I need to conquer was my own apprehensions. The fear of failure, the fear of loss, the fear of social structues, the fear of not being the best, the fear of not being able to please everyone and the fear of losing friends. Mandela taught me that I am strong enough to face my fears and remove the existence of these reservations from my life. I learnt to take calculated risks. I learnt to understand that people around me will be as transient as their aspirations. I understood that the only true companion that a person ever has is his own courage to live life at his own terms. To look at what I have with humility, be grateful for the courage I already possess and accept that people around me may not make the same choices.
Nelson Mandela taught me never to settle for a life less than one that I was capable of living.  His life taught me to be prepared to work and succeed or fail based on my own merits. Every failure is a chance for me to improve myself.
He taught me to stand up for what I thought was right and voice my concerns about what I thought wasn’t. I learnt that just to have an opinion was not good enough. I learnt that despite the merits of rights and wrongs; people will take the side of the situation that suits their agendas the best. Some of these people will be your well- wishers and friends. I learnt to respect their opinion and never assume them to be on the same side of the table just because you anticipated them to be.
Once during a customary tea with Francois Pienaar, at the beginning of his presidency, Nelson Mandela asked him about what Francois’ philosophy on leadership was and how he inspired his team the best. Francois answered Mandela that the best way to lead is to lead by example. Mandela asked him again about how he thought he could make his team think that they are better than what they think they can be? Was it inspiration that led people to believe that they could do more than what they think they were capable of? Anything can be an inspiration. A song that you know. A story that you hear. A quote that you read. Anything that may allow you to expect more of yourself.
We need inspiration. All of us do. You were mine Mr. Mandela. You help me exceed my own expectations. And your principles will continue to guide Meera Kaul.

SO WHEN DOES LIFE BEGIN ?

May 27, 2019
We have been fighting a religion defined definition of “ when did the life of a fetus begin”. It is a trap. The debate around this whole concept is so ridiculous that when you see pages of theories being written about the exact time “life took a birth”

Why I call this entire argument ridiculous is because technically everything is life. A cell is a life. An ant is a life, a plant is a life. Zygotes are life too. However, if you choose to mourn the zygote the same way you chose to mourn taking the dead cells off the bottom off your feet- is a decision you need to make with yourself.

All of these arguments around “life” distract from the actual issue, which is that no human should be required to share their organs with another human. No human should be required to sacrifice their life for another human. The intention or reason behind abortion is irrelevant in the context of the right to bodily autonomy.
I would argue that the Liberal “pro-choice” people who aggressively insist that abortio…
Read more


When Trump spewed his most preposterous lie about abortion in a rally about how full-term babies were killed by Doctors; do you think no one in the crowd was grown up enough to know that it was a lie? These are full grown people who make more important and logical decisions in their lives every day- what to buy; what to do, where to spend, how to earn a living. Do you think they do not know that Trump was concocting imagery for the benefit of creating a national debate about disgust towards the concept of “abortion”? Abortion is painful. Emotionally, it never leaves a woman. I aborted in 1998, then miscarried in 2008 and 2011. Each time, I named those cells and fetuses, celebrate their lives and created a story for their absence in mine, those cells, which could not find viability, for one reason or the other. So for someone, and these 25 white men, and several others, who have never been through that life-…
Read more