We just started a Fire

February 06, 2015
Overwhelmed and humbled! That's how I feel today. We made a difference and We have only started. Women in STEM 2015, our annual event saw the congregation of Women in Science and Technology from around the globe. Over 300 women traveled to Dubai to meet and network with each other. They were from Jordan,Saudi Arabia, Palestine, Qatar, Oman, Kenya, Egypt, Algeria,Lebanon, Yemen,Morocco, Zimbabwe, South Africa, Pakistan, India, Germany, Sweden, United Arab Emirates and the United States. They met as strangers and became friends for life.
The community of women was strong, emotional, focused and the only agenda for the day was to inspire. And they did. These women made their way into the Women in STEM Hall of Fame. There were many inspirational women and so many role models all under one roof on that day. The day seemed brighter just reflecting on that beauty and intellect.As Jessica Obeid, said at the Conference, " The most important thing is to Start," So true. The courage to start is the most important aspect. Moza M Nasr inspired us by saying," We can be whatever we want to be." So true.We just have to imagine the most empowered version of ourselves and work our way towards achieving that self.
Anu Acharya's words resonated with the audience when she stated, " It is time for women in STEM to take their rightful place," Indeed it is. And Pragnya Wakhlu summed up her philosophy with "PUSH - Persist until something happens." 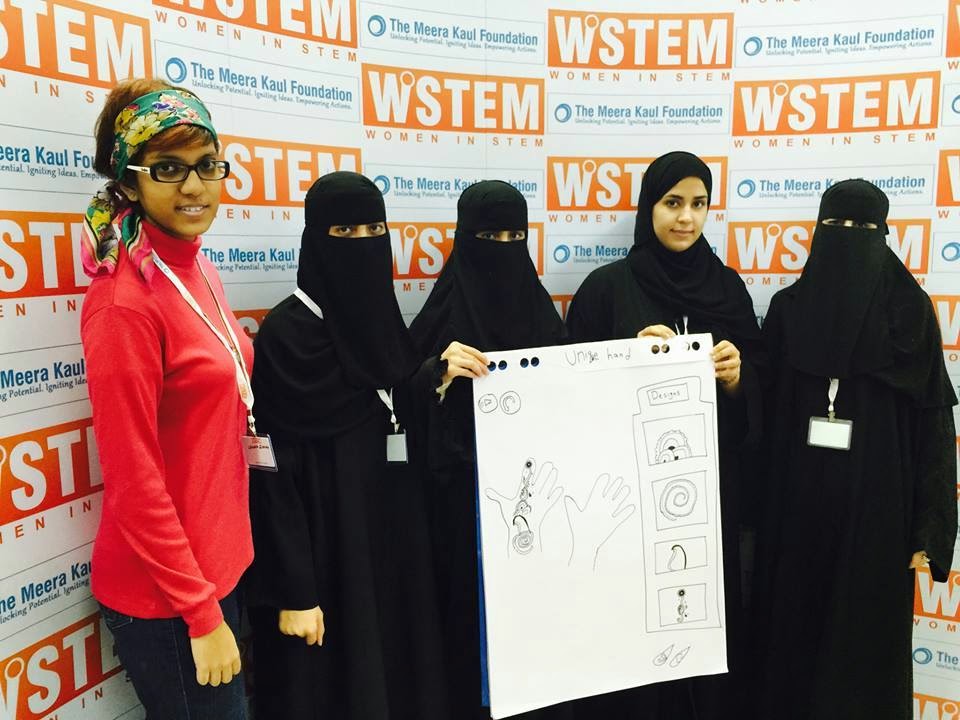 We are creating role models closer to home for the next generation of women and girls. We are showing them the difference. As Shaheen Abdullah said, "I am inspired by the success stories of other people when they have made the seemingly impossible become possible."
Eman Mousheir Ezzat said, " Women are born leaders by passion, by strength, by power not just physically but more so mentally." You are right Eman, Women are strong people. They are capable of making things happen. Women are brave and compassionate, strong and fearless, capable and focused. As Niti Shroff said, " Don't fear anything. Just keep doing what you do and success will follow." And it does.
In my own lifetime, there have been umpteen number of times when I don't know if what I am doing is the right thing to do. But I know for sure that I am focused, dauntless, fearless, and resilient. And that is what I want you to be.
The most exhilarating experience of those two days was to see the 40 women who wanted to learn how to code a game turn up early morning. Claudia Galvan, Jeiyl Long, Rawan Barakat, Delnaz Kakroo, Daisy Parimoo, Shikha Srivastava, Twinee Villaneuva, Peels Badshah and the rest of the Foundation team worked with them for the next day and a half to help them ideate and code their android game. The ideas were valuable, they were viable, and the women were charged with the mission to win.
The winners were ( pictured above) voted by a 4 member jury and won a seed prize to further their venture and market it. Njood, Feda, Muneera, Leanne and Somayh had tears in their eyes when they accepted their awards. For us, this was the start of the change we were working towards. For them, their lives had just been transformed. And that of their families and communities.
It is an overwhelming feeling to be touching lives and making a difference. As Claudia Galvan said, " We are at the tipping point for women in STEM. Lets spread like a wildfire." Let's do just that.

SO WHEN DOES LIFE BEGIN ?

May 27, 2019
We have been fighting a religion defined definition of “ when did the life of a fetus begin”. It is a trap. The debate around this whole concept is so ridiculous that when you see pages of theories being written about the exact time “life took a birth”

Why I call this entire argument ridiculous is because technically everything is life. A cell is a life. An ant is a life, a plant is a life. Zygotes are life too. However, if you choose to mourn the zygote the same way you chose to mourn taking the dead cells off the bottom off your feet- is a decision you need to make with yourself.

All of these arguments around “life” distract from the actual issue, which is that no human should be required to share their organs with another human. No human should be required to sacrifice their life for another human. The intention or reason behind abortion is irrelevant in the context of the right to bodily autonomy.
I would argue that the Liberal “pro-choice” people who aggressively insist that abortio…
Read more


When Trump spewed his most preposterous lie about abortion in a rally about how full-term babies were killed by Doctors; do you think no one in the crowd was grown up enough to know that it was a lie? These are full grown people who make more important and logical decisions in their lives every day- what to buy; what to do, where to spend, how to earn a living. Do you think they do not know that Trump was concocting imagery for the benefit of creating a national debate about disgust towards the concept of “abortion”? Abortion is painful. Emotionally, it never leaves a woman. I aborted in 1998, then miscarried in 2008 and 2011. Each time, I named those cells and fetuses, celebrate their lives and created a story for their absence in mine, those cells, which could not find viability, for one reason or the other. So for someone, and these 25 white men, and several others, who have never been through that life-…
Read more